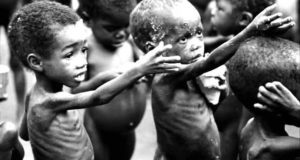 A UN report has said, more than 821 million people suffered from hunger worldwide last year. It is the third year in a row that the number has risen.

The report named, ‘The State of Food Security and Nutrition in the World’, produced by the UN Food and Agriculture Organization and other UN agencies, including WHO, was released.

The report is part of tracking progress towards Sustainable Development Goal to Zero Hunger, which aims to end hunger, promote food security and end all forms of malnutrition by 2030.