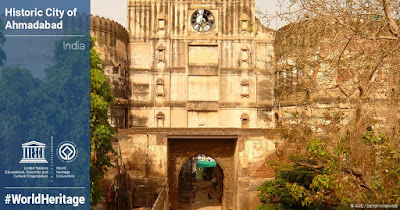 Ahmedabad city has been declared as a World Heritage City at the 41st session of UNESCO’s world heritage committee being held at Krakow in Poland. Nomination of Ahmedabad was supported by close to 20 countries, including Turkey, Lebanon, Tunisia, Portugal, Peru and Kazakhstan. The walled city has 26 ASI-protected structures, hundreds of ‘polls’ that capture the essence of community living and numerous sites associated with Mahatma Gandhi who lived here from 1915 to 1930. Now, Ahmedabad will join the world heritage cities like Paris, Cairo and Edinburgh.
Out of total 287 world heritage cities across the globe, there were only two cities in the Indian subcontinent- Bhaktpur in Nepal and Galle in Sri Lanka. The UNESCO tag will add immense value to Ahmedabad city which will also boost tourism.
Important Takeaways from Above News-
Source- The Financial Express
Find More Miscellaneous News

Read this News in Hindi