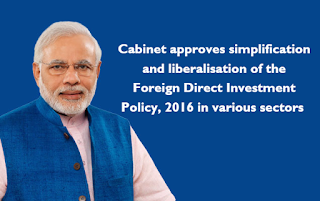 i. FDI in the defence sector is now permitted up to 100%, while earlier 49% FDI was permitted under the automatic route.

ii. For single-brand retail trading, norms of local sourcing have been relaxed for up to three years with prior government approval for entities trading in products having state-of-the-art and “cutting edge” technology.

iii. The FDI ceiling in sectors like teleports, Direct to Home (DTH), cable networks, mobile TV and Headend-in-the-Sky Broadcasting Service (HITS) has been increased to 100%.

iv. For the pharmaceutical sector, new liberalised norms allow 74% FDI under the automatic route for brownfield pharmaceuticals, while FDI beyond 74 per cent would be permitted through the government approval route.

v. For the private security agencies, FDI up to 49% is now permitted under the automatic route, and beyond that and up to 74% by way of government approval.

vi. Food: It has now been provided that 100% FDI under automatic route for trading.