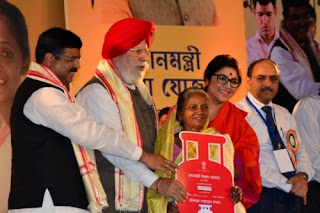 Union Minister of State for Petroleum and Natural Gas Dharmendra Pradhan has launched the Pradhan Mantri UjjwalaYojana (PMUY) in West Bengal, which is a scheme to provide clean cooking fuel to the women belonging to the ‘Below Poverty Line’ (BPL) households across the country.
PMUY which was launched by the Prime Minister of India on May 1, 2016 at Ballia (Uttar Pradesh) aims to provide LPG connections to 5 Crore BPL households by 2019 and is a part of larger programme of adding 10 Crore new LPG connections by 2019 to achieve full coverage of connections in Indian households.
So let’s do:
1. Union Minister launches clean cooking fuel scheme for BPL women in which state?
2. Expand the term PMUY and who is the Union Minister of State for Petroleum and Natural Gas?