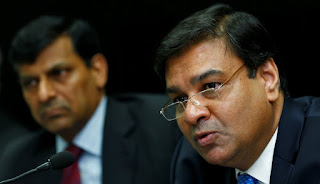 Urjit Patel is the new Reserve Bank of India Governor, the Finance Ministry Arun Jaitley announced. Patel will succeed Raghuram Rajan as the RBI chair once he steps down on September 3, after his term comes to an end. He will be India’s 24th RBI Governor.
One of the RBI’s four deputy governors, Patel, 52, was reappointed in January for another three years. He has run the central bank’s monetary policy department since 2013 and is viewed as a leading contender for the governor’s job. Urjit R. Patel is an Indian economist, consultant and banker, currently serving as Deputy Governor of the Reserve Bank of India (RBI). As Deputy Governor of RBI, he looks after monetary policy, economic policy research, statistics and information management, deposit insurance, communication and Right to Information. On 20 August 2016.
So let’s do:
1. Name the person, who has appointed as new Reserve Bank of India Governor?