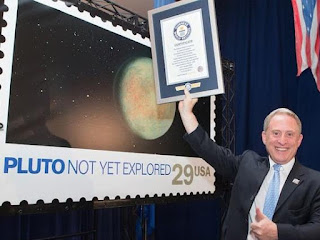 United States postal service made history after a stamp was send to Pluto which they placed on New Horizons spacecraft of the American space agency. The stamp travelled a mind-blowing 5,250,843,896 km becoming the stamp to travel longest distance ever in history.
After the arrival of spacecraft at Pluto on 14 July 2015, the stamp earned a Guinness World records title for the farthest distance travelled by a postage stamp.  New Horizons spacecraft was launched from Cape Canaveral in Florida, USA, on 19 January 2006. The achievement was confirmed by official Guinness World Records adjudicator Jimmy Coggins at an event yesterday. He told guests that the stamp had covered the distance of about 131 times the circumference of the Earth. The record-breaking stamp that travelled on the rocket was from a special series created in 1991 which showed each of the nine planets in our Solar System and the vessels that had explored them.

So let’s do:
1. Name the country, which has made history after a stamp was send to Pluto which they placed on New Horizons spacecraft of the American space agency?