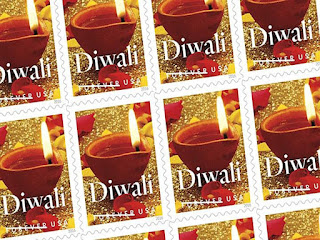 The United States Postal Service (USPS) announced a new stamp commemorating Diwali, the Hindu festival of lights. Diwali, which falls between mid-October and mid-November, is depicted on the stamp with a lit diya oil lamp, a lamp traditionally used in many Hindu holidays. The stamp will first be issued on Oct. 5, and a first-day-of-issue dedication ceremony will also take place at the Consulate General of India in New York.
The stamp design is a photograph featuring a traditional diya oil lamp beautifully lit, sitting on a sparkling gold background. Diya lamps are usually made from clay with cotton wicks dipped in a clarified butter known as “ghee” or in vegetable oils.

So let’s do:
1. Name the country, which has announced a new stamp commemorating Diwali, the Hindu festival of lights Diwali?