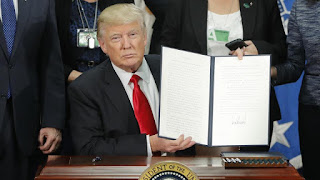 US President Donald Trump has signed directives to build a wall along the US border with Mexico and crack down on US cities that shield illegal immigrants, proceeding quickly on sweeping and divisive plans to Kerb immigration and boost national security. The Republican President is also expected to take steps in the coming days to limit legal immigration, including executive orders restricting refugees and blocking the issuing of visas to people from several Muslim-majority Middle Eastern and North African countries including Syria, Sudan, Somalia, Iraq, Iran, Libya and Yemen.
Trump signed two executive orders at the Department of Homeland Security, one ordering construction of a wall along the roughly 2,000-mile (3,200kilometre) US-Mexico border and the other moving to strip federal grant money from “sanctuary” states and cities, often governed by Democrats, that harbour illegal immigrants.
Source- The Hindustan Times