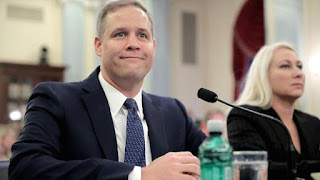 Jim Bridenstine, a congressman from Oklahoma, US Navy veteran, and former pilot, was confirmed on a 50-49 vote and will become the 13th administrator of the National Aeronautics and Space Administration (NASA) seven months after Trump named him to lead the agency.
Bridenstine, 42, has expressed an interest in returning humans back to the moon, spoken of closer ties between NASA and the commercial space industry, and has voiced skepticism about human-caused climate change.
Static/Current Takeaways Important for NABARD Grade-A Exam 2018-
Source- DD News
Read this news in hindi
×