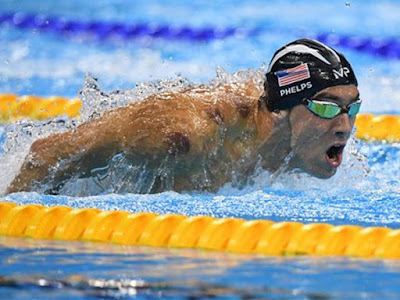 United State swimmer Michael Phelps bagged his 26th Olympic medal on breaking the 2000 year old record. After dominating 200 m individual medley he became first swimmer to win four consecutive gold medals in the same individual event.
The US swimmer won his fourth straight 200m individual medley, finishing 1.95 seconds ahead of Japan’s Kosuke Hagino. With the victory, Phelps joined the track and field Olympians Al Oerter and Carl Lewis as the only Americans to win an individual event four times. In Rio Olympics, he has win gold in four events namely – Men’s 4x200m freestyle relay, Men’s 200m butterfly, Men’s 4x100m freestyle relay and Men’s 200m individual medley. And he is not finished yet: on Friday he will race in the 100m butterfly and on Saturday he could win another gold in the 4x100m medley relay, which would be the 31-year-old’s farewell race.
So let’s do:
1.Name the Swimmer, who has bagged 4th gold at Rio and breaks 2000 year- old record?