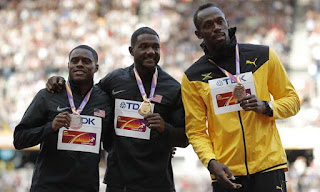 Justin Gatlin tore up Usain Bolt’s farewell script as he stole world 100m gold with the run of his long and controversial career. Bolt was left with only a bronze in his final individual 100m race as 21-year-old Christian Coleman made it a USA one-two.
The 35-year-old Gatlin, twice banned for doping, came through almost unnoticed in lane seven in 9.92 seconds, with Coleman’s 9.94 holding off the greatest sprinter of all time.
Source- The BBC Sport

To Read This News In Hindi