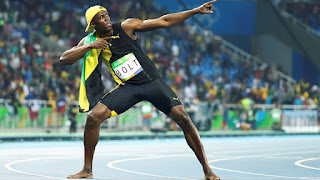 Jamaican sprinter Usain Bolt has won gold in the 100-metre final in Rio de Janeiro, Brazil. With this win, Bolt became the first man to win the event 3 times at consecutive Olympic Games.
Bolt won the race in 9.81 seconds, followed by USA’s Justin Gatlin at 9.89 seconds and Canada’s Andre De Grasse at a personal-best 9.91 seconds. De Grasse is also the first Canadian male athlete to win a medal in Rio. Usain St. Leo Bolt is a Jamaican sprinter. He is the first man to hold both the 100 metres and 200 metres world records since fully automatic time became mandatory. He also holds the world record in the 4 × 100 metres relay. He is the reigning World and Olympic champion in these three events.
So let’s do:
1. Name the sprinter, who has won gold in men’s 100 meters in Rio Olympics?