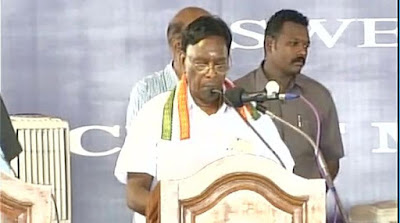 Congress Legislature Party leader, V Narayanasamy was sworn in as Chief Minister of the Union Territory of Puducherry. Lt. Governor Kiran Bedi administered the oath of office and secrecy at a function held at the historic Gandhi Thidal in Beach Road. while, Congress legislators A Namassivayam, Shah Jahan, M Kandasamy, R Kamalkannan and Malladi Krishna Rao were also sworn in as ministers.

Narayanasamy represented Puducherry in Rajya Sabha for three terms. He was elected to Lok Sabha in 2009 and served as Minister of State in Prime Minister’s Office in UPA II. Narayanasamy is not a member of the house hence needs to face polls in 6 months.