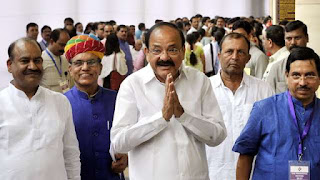 Venkaiah Naidu is going to succeed Hamid Ansari as the new Vice-President of India. Naidu’s victory was a foregone conclusion, the NDA candidate having the support of a majority of MPs who ally with the BJP.
The Election Commission said that 771 votes were polled, of which 760 were valid and 11 were valid. Venkaiah Naidu secured 516 and Gopalkrishna Gandhi 241 votes. This means, that Venkaiha Naidu will become the 13th Vice President of India.
Source- The Financial Express
×