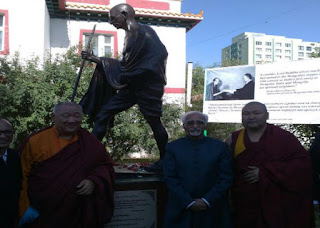 Vice President Hamid Ansari has unveiled a stone statue of Mahatma Gandhi at Pethub Monastery in the Mongolian capital which is seen as symbol of India-Mongolia cultural and spiritual ties.
After unveiling the statue of the ‘Father of the Nation’, the Vice President also went around the monastery founded by former Indian ambassador Kushok Bakula Rinpoche. Pethub Monastery, seen as symbol of India-Mongolia cultural and spiritual ties, was inaugurated in August, 1999 by Indian Vice President Krishan Kant. Rinpoche named his monastery as ‘Pethub’, which in Tibetan means a model or exemplary. The name is drawn from the main monastery in Ladakh which is also known as Spituk Monastery and is over 800 years old.

So let’s do:
1. Name the person, which has unveiled a stone statue of Mahatma Gandhi?