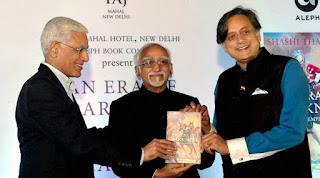 Vice President of India, M. Hamid Ansari released book ‘An Era of Darkness: The British Empire in India’ authored by Dr. Shashi Tharoor. Vice President said that the author rightly points out that British rule in India was effectively and regularly supplemented by “famine, forced migration and brutality” – the ‘three examples of why British rule over India was despotic and anything but enlightened’.

So, let’s discuss some questions related to this post:
Q1. The book “An Era of Darkness: The British Empire in India” has been authored by whom?
Answer: Dr. Shashi Tharoor
Source – The Hindu