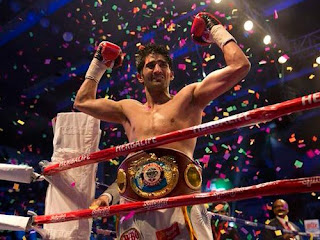 Vijender dominated in the first two rounds and made Hope to go into defensive mode, however, Kerry with his resilient knock in the consecutive rounds, was constantly evading Singh’s penetrative punches. The final round saw Singh leading with huge advantage came down heavily on Hope. The 30-year old Indian champ dominated over the 34 year old-Australian in his longest match inside the ring  and scored  98-92, 98-92, 100-90 to be the unanimous winner.

So let’s do:
1.  Name the boxer, who won the WBO Asia Pacific title?