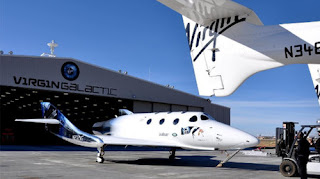 The U.S. Federal Aviation Administration’s Office of Commercial Space Transportation (FAA-AST) awarded Virgin Galactic an operating license for ‘SpaceShipTwo’ which will take passengers for a tour in the outer space.
The license award comes as the new vehicle, VSS Unity, begins to stretch its legs with the first tests conducted out of the hangar. Unity conducted the first taxi test to evaluate and calibrate the navigation and communications, telemetry systems.  Unity was pulled by a Range Rover Autobiography provided by Virgin Galactic’s automotive partner Land Rover, the same vehicle that will be used to tow Unity off the runway after flight tests. The license award, which will ultimately permit commercial operations of the vehicle, was the culmination of several years of in-depth interaction with the FAA.

So let’s do:
1. Name the space craft, which has awarded an operating license for ‘SpaceShipTwo’ which will take passengers for a tour in the outer space?