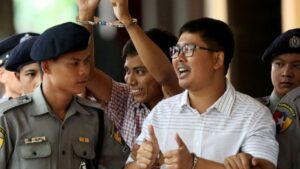 They collected classified military records that revealed extrajudicial assassinations of Rohingya Muslims by the army in Rakhine State. The UNESCO/Guillermo Cano World Press Freedom Prize will be given on May 2 as part of the observance of World Press Freedom Day (3 May) in Ethiopia.