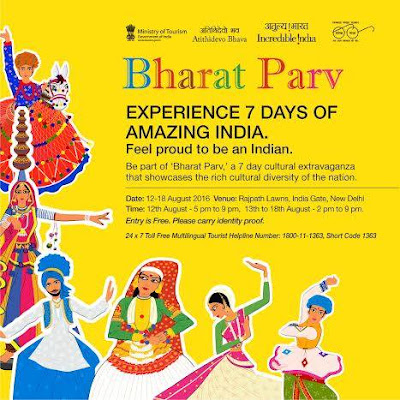 As part of the Independence Day celebrations, the Union Tourism Ministry led by Dr. Mahesh Sharma is organising “Bharat Parv” in the north and south lawns of Rajpath between Man Singh Road and Janpath to create a festive mood and kindle patriotism among people.
In the festival, the first-of-its-kind and culminate on August 18, the Tourism Ministry has selected Karnataka as theme state. Bharat Parv is a 7 day cultural extravaganza that showcases the rich cultural diversity of the nationals, Karnataka will showcase vivacious art, culture, tradition, handicrafts, handlooms and delicious cuisines of the state during the event. Karnataka will have exclusive stalls where it will exhibit its handicrafts as well as handlooms. It will also set up a food court, where some of the mouth watering dishes like Mysore Pak, Jowar Roti, Ragi ball, Mangalore fish curry and dishes from Coorg will be served.