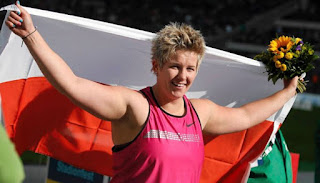 Poland’s Anita Wlodarczyk underlined her absolute dominance of the women’s hammer by throwing a world record 82.29 meters to win Olympic gold by more than five and a half meters.
Anita Wlodarczyk is a Polish hammer thrower. The only woman to have thrown the hammer further than 80 meters, the 31-year-old world champion had already broken the Olympic record with a second throw of 80.40 when she entered the ring for the third time. She is considered the greatest women’s hammer thrower of all time.

So let’s do:
1. Name the person, who has won the hammer throw gold?