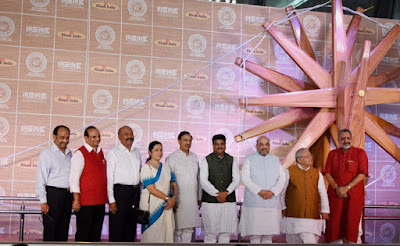 The Charkha was installed at the departure forecourt of the terminal with a belief that it would help in carrying forward the legacy of promoting India’s rich cultural heritage through different artworks at the terminal. The Charkha that weighs 4-tonnes is made from high-quality Burma teak wood.It is 9 ft wide, 17 ft tall and 30 ft long.It is estimated that the Charkha would last for over 50 years. It was built in 55 days by a team of 42 highly skilled carpenters hailing from Ahmedabad.

So let’s do:
1. Name the airport, Which was unveiled World’s largest charkha?