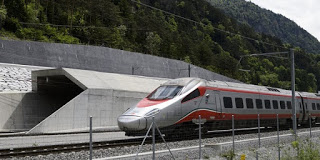 The famed Gotthard Base Tunnel (GBT), connecting Zurich to Lugano, was opened on 11 December 2016. The 57-kilometre GBT has been built at the cost of $11.8 billion in nearly 17 years. The GBT has surpassed Japan’s 53.9-kilometre Seikan tunnel as the world’s longest train tunnel.
The Swiss national rail service had announced that today would mark the start of normal commercial traffic through the 57km GBT, which took 17 years to build, at a cost of over 12 billion Swiss francs (€11.2 billion).


So, let’s discuss some questions related to this post:
Q1.  Name the country, where the longest rail tunnel opens?
Ans1. Switzerland
Source-The Hindu