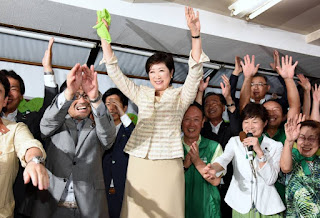 Despite defiantly running without the LDP’s consent, Koike, 64, defeated her two top rivals and will now oversee a city of more than 13 million residents.Koike is a former TV anchorwoman, defence minister and environment minister. Koike claimed victory and addressed supporters shortly after the media declared her the winner.

So let’s do:
1. Name the person, who was elected Tokyo governor?