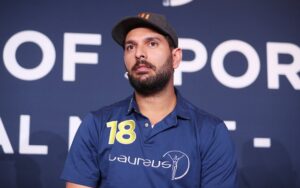 Yuvraj Singh announced retirement from international cricket, ending a roller-coaster career during which he became the hero of India’s 2011 World Cup triumph and fought a gritty battle with cancer.

The 37-year-old cricketer announced his decision in Mumbai. Yuvraj played 40 Tests, 304 ODIs and 58 T20Is for India. He put together 1900 runs in the longest format, and 8701 in the one-dayers, the format in which he enjoyed the most success.