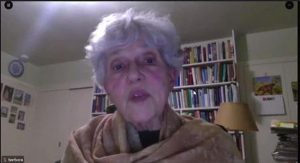 Noted American historian Prof. Barbara Metcalf was awarded the Sir Syed Excellence Award 2022 by the Aligarh Muslim University (AMU) on the 205 th birth anniversary of its founder Sir Syed Ahmad Khan. Prof. Metcalf has written extensively on the history of the Muslim population of India and Pakistan. “Muslims constituted a full quarter of the population at the time of Independence and an important share of the Indian citizenry in the Republic of India thereafter. Yet their histories are understudied and are essential to telling India’s history well.

About the Prof. Barbara Metcalf:

The Professor Emerita of History at the University of California, Davis, USA, remarked, “Sir Syed’s modernist interventions preceded those of the Egypt-based modernists who too often are taken as founders of these trends of thought.”

Prof. Metcalf, who has studied the role of ulama or Islamic scholars, underlined that Aligarh and Deoband schools had a great deal in common, something that is not appreciated. “My starting premise of when I worked on my dissertation ‘A Study of the Founding and Early Years of the Madrasa at Deoband’ was the fact that Aligarh and Deoband had a great deal in common – their leaders emerging from the same reformist intellectual milieu in Delhi, their sharing a concern for Muslim well-being, their embrace of institutional models for schooling taken from British patterns.”

Who was Sir Syed Ahmad Khan?

Sir Syed Ahmad Khan (17 October 1817 – 27 March 1898; also Sayyid Ahmad Khan) was a South Asian Muslim reformer, philosopher, and educationist in nineteenth-century British India. Initially espousing Hindu-Muslim unity, he became the pioneer of Muslim nationalism in India. Born into a family with strong debts to the Mughal court, Ahmad studied the Quran and Sciences within the court. He was awarded an honorary LLD from the University of Edinburgh in 1889.