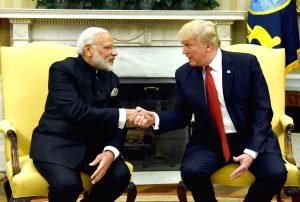 President of the United States (POTUS) Donald Trump is arriving on a two days visit to India on 24th February 2020. He will be accompanied by the First Lady of the United States Melania Trump along with other US delegates. During this official visit, POTUS will explore the Indian culture and traditions complemented with the scheduled visit to some key places including Taj Mahal at Agra, Sabarmati Ashram as well as Rashtrapati Bhavan.

Now, let us look at the key events which are going to take place during the visit of the President of the United States (POTUS) Donald Trump to India.

The President of the United States (POTUS) Donald Trump will land in Ahmedabad, Gujarat on February 24 where he will be received & welcomed by the Indian Prime Minister Narendra Modi. With this, Donald Trump will become the first serving US President to visit Gujarat where a 22 km long roadshow has been organized for the US president on the streets of Ahmedabad, Gujarat.

During the roadshow, POTUS will also visit Sabarmati Ashram to pay tribute to the Father of the Nation Mahatma Gandhi. After paying tribute, he will be presented with a spinning wheel, and books on the life and times of Gandhi along with a portrait sketch of Mahatma Gandhi.

Following the Sabarmati Ashram visit, both the leaders will arrive at the world’s largest cricket stadium “Sardar Patel Stadium” which is also known as “Motera Stadium” to attend and address the “NAMASTE TRUMP” event. The “NAMASTE TRUMP” event which will also feature cultural performances is expected to be attended by 1.25 lakh people.

Following the “NAMASTE TRUMP” event, the US delegate will land at Kheria Airport, Agra, Uttar Pradesh to visit one of the 7 wonders of the world, i.e. the iconic “Taj Mahal” in Agra. After admiring the beauty of the iconic Taj Mahal, delegates will return to Delhi for the rest of their trip.

On 2nd day of the POTUS’s India trip, the US president will officially engage with the President of India Ram Nath Kovind along with ceremonial reception at the Rashtrapati Bhavan. President Kovind will also host a banquet for the US president at the Presidential House in Delhi. This will be followed by a visit to Raj Ghat to pay homage to Mahatma Gandhi.

After visiting Raj Ghat, the US delegation will visit Hyderabad House where present partnerships and future prospects for the two countries will be discussed by the US president and Indian prime minister. The discussions will include security, defence, counter-terrorism, energy as well as trade. After the discussion, US delegates will be heading for the CEO roundtable at the US Embassy in India. Here, the US president will have a conversation with top business persons of the country.

At the end of the day, the delegation from the US will return to United States in an Air Force One plane departing from New Delhi.