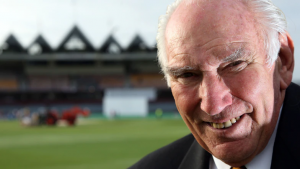 Reid scored 3428 runs in 58 Test matches with an average of 33.28, hitting 22 half-centuries and six centuries in a career that spanned over 16 years. His maiden Test century, a knock of 135, came against South Africa in Cape Town in 1954.