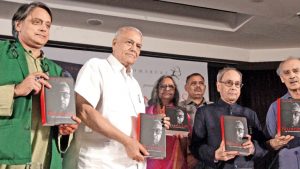 Haryana CM releases the book “A Commentary and Digest on The Air, Act 1981”