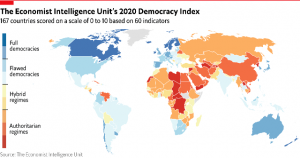 India’s position has slipped by two places to be placed at 53rd spot in the 2020 Democracy Index, from among 167 countries. The overall score of India is 6.61 in the Index, on a scale of 0-10. India has been classified as a ‘flawed democracy’. Democracy Index is the global ranking released by The Economist Intelligence Unit (EIU) that provides a snapshot of the current state of democracy worldwide.