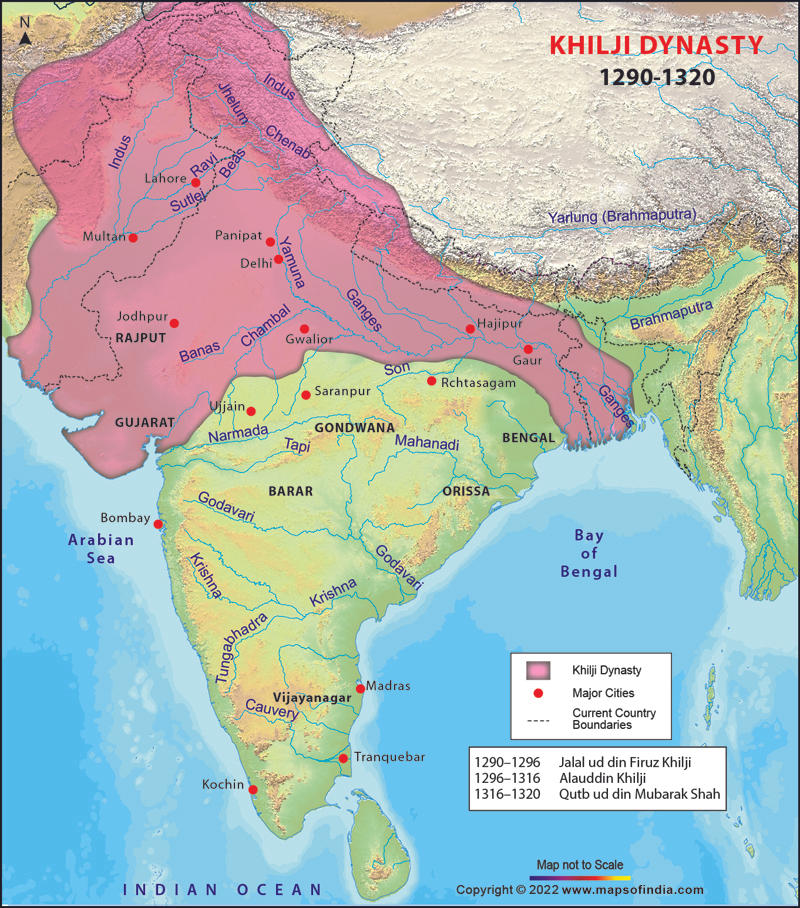 The Khalji or Khilji dynasty was a Turko-Afghan dynasty that ruled over the Delhi Sultanate for about three decades, from 1290 to 1320, and ruled over huge swaths of the Indian subcontinent. The second dynasty to rule the Delhi Sultanate of India, it was founded by Jalal ud din Firuz Khalji and came to power in a revolution that signified the transfer of authority from Turkic nobility to Afghans. Its reign is remembered for conquests into modern-day South India and for effectively repelling Mongol invasions of India.

Jalaluddin Khalji was a Turk of Khalji tribe and his forefathers were the inhabitants of Turkistan. Members of his family settled down in India long ago and they served in the reign of Iltutmish and Balban. Jalaluddin was appointed Sar-i-Jandar due to his ability and capability, he rose to this prize post by his merit. Later on, he was appointed governor of Samana. He fought many battles against the Mongols. Being pleased, Kaiqubad invited him to Delhi after the assassination of Nizamuddin and appointed him Ariz-i-Mamalik. The title of Shaista Khan was also bestowed upon him at this occasion. Soon his influence enhanced in the army and administration. He organized all the Khalji nobles, officers and soldiers under his leadership. He also got the cooperation and support of Turkish nobles and officers. Thus the power of the Khaljis went on increasing. After killing the sultan Kaiqubad Jalaluddin became the regent of infant Kayumars for some days. Later on, Kayumars was also put to death and Jalaluddin occupied the throne himself.

Ala-ud-din (died 1316) was the second sultan of the Khalji dynasty of Delhi in India. His totalitarian rule marked the beginning of the imperialistic period of the sultanate and the rise to power of native Indian Moslems.

Not much is known of the early life of Ala-ud-din. He was appointed governor of Kara by his uncle and father-in-law, Sultan Jalal-ud-din Khalji, in 1292. Three years later he invaded Malwa, captured Bhilsa, a wealthy commercial center, and drew up plans to usurp the sultanate. In 1296 he became the first Moslem invader to penetrate the Vindhya Mountains into the Deccan and, after defeating the Hindu raja of Devagiri, obtained a booty that contained 17,250 pounds of gold, 200 pounds of pearls, and 28,250 pounds of silver. Supported by crack troops and armed with these riches, he assassinated his father-in-law and proclaimed himself the sultan of Delhi in 1296.

Alauddin Khalji died in January 1316. Thereafter, the sultanate witnessed chaos, coup and succession of assassinations. Malik Kafur became the sultan but lacked support from the amirs and was killed within a few months.

Over the next three years following Malik Kafur’s death, another three sultans assumed power violently and/or were killed in coups. First, the amirs installed a six-year-old named Shihab-ud-din Omar as sultan and his teenage brother, Qutb ud din Mubarak Shah, as regent. Qutb killed his younger brother and appointed himself sultan; to win over the loyalty of the amirs and the Malik clan he offered Ghazi Malik the position of army commander in the Punjab. Others were given a choice between various offices and death. After ruling in his own name for less than four years, Mubarak Shah was murdered in 1320 by one of his generals, Khusraw Khan. Amirs persuaded Ghazi Malik, who was still army commander in the Punjab, to lead a coup. Ghazi Malik’s forces marched on Delhi, captured Khusraw Khan, and beheaded him. Upon becoming sultan, Ghazi Malik renamed himself Ghiyath al-Din Tughluq, becoming the first ruler of the Tughluq dynasty.

With the succession of Jalal-ud-din Khalji as Delhi Sultan on June 13, 1290, the Khalji Dynasty was established. In the beginning of the year 1290 A.D., the Mamluk dynasty governed Delhi. Muiz ud din Qaiqabad was the tenth and final line ruler, and it is reported that Jalal-ud-din Khalji assassinated him. When a group of Qaiqabad nobles attempted to install his newborn son, Kayumars, on the throne, Jalal-ud-din assassinated them, and the infant was ousted. Then Jalal-ud-din seized the throne and was proclaimed Sultan of Delhi on June 13, 1290, marking the start of the Khalji dynasty in Delhi.

The Khilji dynasty’s economic policy and administration were exceedingly rigorous, and everything was in the hands of the King. The situation of peasants, businesspeople, and the average man was dire and difficult to maintain at times. Khilji monarchs, particularly Alauddin Khilji, altered expenditure methods solely to build his treasury, fulfil his obligations, and stockpile for his expansionist wars. He simply increased agricultural taxes from 20% to 50%, payable in the form of grain and rural produce or cash, and he eliminated instalments. Alauddin Khilji imposed four different types of taxes on non-Muslims in the Sultanate: jizya (poll tax), kharaj (land tax), kari (house tax), and chari (field duty). He also proclaimed that his Delhi-based officers, as well as local Muslim jagirdars, khuts, mukkadims, chaudharis, and zamindars, might seize half of all output as a cost on standing yield in order to fill sultanate storerooms by force.

The second dynasty to rule the Delhi Sultanate of India, it was founded by Jalal ud din Firuz Khalji and came to power in a revolution that signified the transfer of authority from Turkic nobility to Afghans.

On the night of January 4, 1316, Alauddin died. According to Barani, Kafur murdered him, according to “some individuals.” Kafur retrieved Alauddin’s body from the Siri Place late at night and had it buried in Alauddin’s mausoleum (which had previously been erected before Alauddin’s death).

How many kings are there in Khilji Dynasty?

How did Khilji Dynasty start?

Jalal-ud-din Between 1290 until 1320, Khilji ousted Balban’s heirs and established the Khilji Dynasty, which dominated huge sections of South Asia. The Delhi Sultanate of India was ruled by the second dynasty. The Khilji dynasty took its name from an Afghan village.