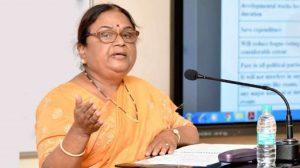 Neela Satyanarayan has also penned books such as Vanava and Ek Purna Ek Apurna along with several collections of poetry. She has also composed music for a film.