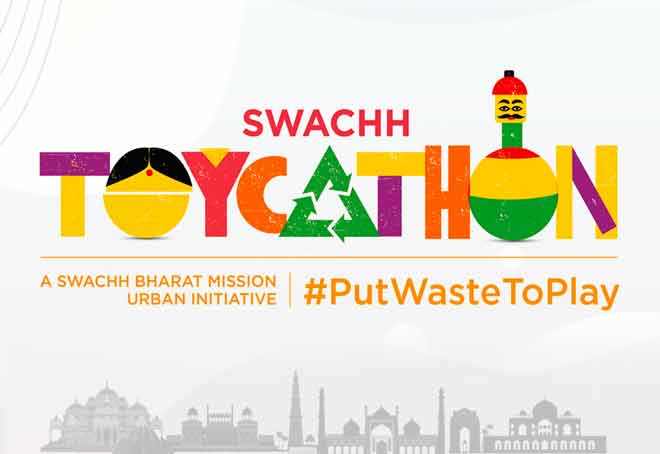 The Ministry of Housing and Urban Affairs (MoHUA) launched Swachh Toycathon under the Swachh Amrit Mahotsav. The competition aims to explore solutions for use of waste in the creation or manufacturing of toys. Secretary, MoHUA, Manoj Joshi, launched the event on MyGov portal and released the toolkit.

Addressing the occasion, Joshi said creative minds should come up with innovative solutions that meet the growing demand for toys on one hand and address the impacts of solid-waste on the other. Toys must remain a source of wonder and joy for children launching them on journeys of imagination. Household waste items can be turned into toys that teach children about basic principles of science, said Manish Jain, principal coordinator of Center for Creative Learning, in IIT Gandhinagar.

The Center for Creative Learning, IIT Gandhinagar, is MoHUA’s knowledge partner for the initiative. They will be providing support on aspects of pedagogy and creativity. Joint secretary, MoHUA, Roopa Mishra, said there is a comprehensive approach being covered in the initiative as well as the way forward after the competition.

National Action Plan for Toys (NAPT) 2020 was introduced to promote the Indian toy industry including traditional handicrafts and handmade toys with the objective of establishing India as a global Toy hub. Department for Promotion of Industry and Internal Trade (DPIIT) along with 14 ministries of Central Government is currently implementing various aspects of the NAPT.

Besides being the second largest populated country in the world, India also has a growing young population with half of the total population under 25 years of age. The demand for toys is also increasing due to strong economic growth, rising disposable incomes, and several innovations for the junior population. With ever-changing consumption patterns and rapid rise of e-commerce, the per capita waste generation has steadily increased over the last decade, making waste management in cities a challenge for Urban Local Bodies. The second phase of Swachh Bharat Mission (SBM 2.0) was launched on 1st October 2021 by the Hon’ble Prime Minister with a vision of ‘Garbage Free’ cities by 2026.