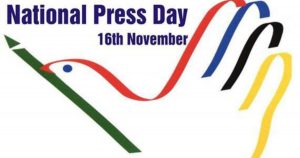 In 1956, the First Press Commission was planned to form a Press Council to protect freedom of the press in India. On 4 July 1966, the Press Council was established in India. It came into effect from 16 November 1966. Therefore, 16 November is celebrated as National Press Day every year.

About Press Council of India:

The Press Council of India was formed in 1966 under the Press Council Act of 1978. It exercises authority even over the instruments of the state in its duty to safeguard the independence of the press. It ensures that the Indian press is not affected by any external matter.