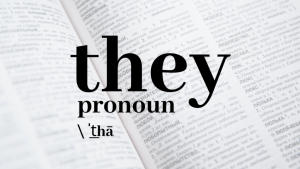 Neutral pronoun ‘they’ has been voted word of the decade by US language experts. “They” is used in English by a growing number of non-binary individuals, people who do not identify as either male or female. They prefer the plural neutral pronoun to bypass using the pronouns “he” or “she”.

The selection of “they” is an indication that how a personal expression of gender identity has become an increasing part of our shared discourse. The recognition comes after US dictionary Merriam-Webster in December named “they” as word of the year. The American Dialect Society had previously named “they” word of the year in 2015. Other contenders in the decade category included #BlackLivesMatter, #MeToo, climate, emoji, meme, the opioid crisis and woke.