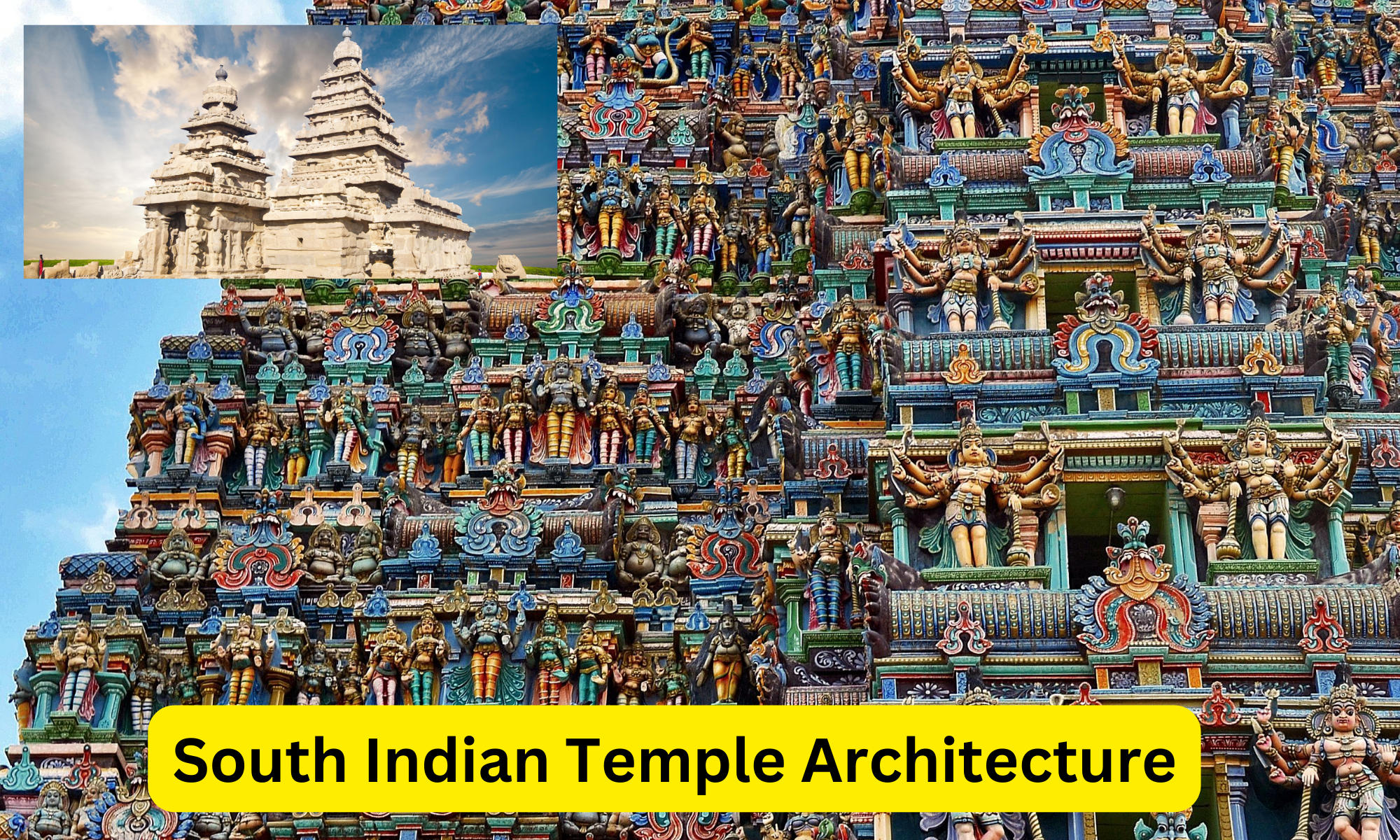 From the seventh through the eighteenth centuries, Hindu temples in contemporary Tamil Nadu were built exclusively in South Indian temple style, also known as Dravida Style, which is distinguished by its pyramidal, or kina-type, tower. States like Karnataka (formerly Mysore) and Andhra Pradesh have different varieties.

The basic structure of a South Indian temple is a square-chambered sanctuary surrounded by a peristyle of cells within a rectangular court, with a superstructure, tower, or spire atop it. An associated pillared portico or hall (mandapa) is also present. The temples’ outside walls are divided by pilasters and have niches that house sculpture. The superstructure or tower above the sanctuary is of the kina type and has a pyramidal arrangement of stories that gradually recede from the top.

A parapet of tiny shrines, square at the corners and rectangle with barrel-vault roofs in the middle, separates each story. A cupola with a dome form, a crowning pot, and a finial sits atop the tower.

The South Indian style is most fully realized in the splendid Brihadisvara temple at Thanjavur, built about 1003–10 by Rajaraja the Great, and the great temple at Gangaikondacholapuram, built about 1025 by his son Rajendra Chola. Subsequently, the style became increasingly elaborate—the complex of temple buildings enclosed by the court became larger, and a number of successive enclosures, each with its own gateway (gopura), were added. By the Vijayanagar period (1336–1565) the gopuras had increased in size so that they dominated the much smaller temples inside the enclosures.

The Gupta era is where the Dravida style first appeared. The Shore Temple (about 700) and the rock-cut shrines from the 7th century at Mahabalipuram are the earliest surviving examples of the evolved form.

The three components below, which can be placed in many ways but are almost always found in Chola-style temples, differ solely in terms of the era in which they were built.

In addition to these, a South Indian temple typically features a tank called the Kalyani or Pushkarni, which is utilised for sacred reasons or the priests’ convenience, as well as adjacent housing for all levels of the priesthood and other state- or convenience-related buildings.

The solitary rock temples in Mahabalipuram and their capital Kanchipuram, presently found in Tamil Nadu, are the Pallavas’ most notable architectural achievements. The Pallavas ruled from 275 CE to 900 CE.

The architecture and artwork the Chalukya kingdom left behind are its most enduring legacies. In the Malaprabha basin in Karnataka, there are still more than 150 monuments that are assigned to the Badami Chalukya and that were constructed between 450 and 700.

Some of the best Dravidian temples were created in Ellora (the Kailasanatha temple) by the Rashtrakutas, who governed the Deccan from Manyakheta, Karnataka, between 753 and 973 CE. Their rock-cut architecture style incorporated elements from both north and south India. The Jaina Narayana Temple at Pattadakal and the Navalinga Temples in Kuknur in Karnataka are two other beautiful structures.

From the reign of the first Chola ruler Vijayalaya Chola, after whom the unique chain of Vijayalaya Chozhisvaram temples at Narttamalai exists, the Cholas were prolific temple builders. These are the oldest Chola-era examples of Dravidian temples. Aditya I, his son, constructed a number of temples at Kanchi and Kumbakonam.

The Vijayanagara Empire, which governed all of South India from 1343 to 1565 CE, constructed a multitude of temples and monuments in their capital city of Vijayanagara in Karnataka in their unique hybrid style. They combined some of the styles created in South India over the course of several centuries.

They also made a distinctive contribution with the elaborate pillared manatapa, balustrades (parapets), and Yali columns (pillar with charging horse). In the Vijayanagara architectural style, King Krishna Deva Raya and others constructed a number of well-known temples throughout South India.

Kerala in the extreme southwest has a very different style of Dravidian architecture. Very big temples are uncommon, and their shapes are often dominated by sloping roofs with projecting eaves that are grouped in multiple tiers. This is an adaptation to the intense monsoon rainfall, similar to Bengal. A stone core typically lies beneath a timber superstructure. Kerala’s architecture dates to the Chera kingdom in the 12th century and has utilised a number of ground patterns, including circular ones. Multi-building complexes were only recently developed.

Architectural designs reflect Sri Lankan culture. The bulk of Jaffna’s residents are of Dravidian descent, and the city is near to South India. There are Jaffna kingdom architectural ruins in Nallur, a former royal city.

What are the three styles of temple architecture in South India?

Which style of temple architecture is predominant in South India?

What is Dravidian temple architecture?

Dravidian architecture, also known as the South Indian temple style, is a Hindu temple architectural idiom that first appeared in Sri Lanka and South India in the sixteenth century and developed into its final form.

Can you tell the difference in the architecture of north Indian and South Indian temple?

Many temples in North India, or mandirs, are located in picturesque settings like mountaintops, riverbanks, caves, or gardens. Temple entrances in South India are embellished with imposing gopurams that lead to more modest interior towers; in the north, the situation is the opposite.