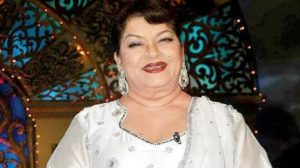 Veteran Bollywood choreographer, Saroj Khan passed away. She was popularly known as Saroj Khan but her real name is Nirmala Nagpal. She joined the Indian film industry as a child artiste, playing the younger Shyama in Nazarana. She eventually became a background dancer in 1950s films like Bimal Roy’s “Madhumati” under the guidance of dance director B. Sohanlal.