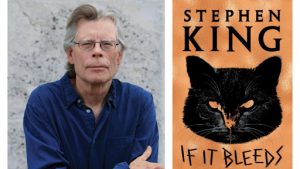 A new book titled “If It Bleeds”, a collection of four stories, authored by Stephen King has been released. The book published by Hachette India. The book has the story centres around a bomb at Albert Macready Middle School.  It is a sequel to his bestselling work, “The Outsider”.

King is one of the most distinguished contemporary authors. He has been the recipient of the 2014 National Medal of Arts. He was also awarded the 2003 National Book Foundation Medal for Distinguished Contribution to American Letters. He was in the news recently for voicing his support for the transgender community.