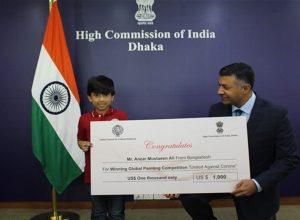 A six-year-old Bangladeshi boy, Anzar Mustaeen Ali won a special prize of USD 1000 for his artwork in the global art competition organised by the Indian Council of Cultural Relations (ICCR). The ICCR had launched a global painting competition named ‘United Against CORONA- Express through Art’ which attracted 8000 artwork entries from around the world. After the first round of competition 210 artworks were shortlisted.

The final jury evaluated and decided the winners from each category such as Indian and Foreign, Professional/Amateur/Children in four different sections: