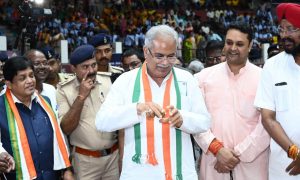 Chhattisgarh chief minister Bhupesh Baghel has inaugurated the state’s own Olympics. The aim is to provide a centerstage to the village level sports so that a feeling of pride for the culture is inculcated. Secondly, to channelise the energy of the local youths which is very important for our society, Baghel inaugurated the grand multi-sport event at Balbir Singh Juneja Indoor Stadium in Raipur, claiming to revive the age-old-tradition of traditional games namely ‘langdi’, ‘bhaura’, ‘bati’ (kancha), and ‘pitthul’. The event will continue till January 6, 2023 and as many as 14 types of traditional sports have been included in the team and individual categories of separate age groups.