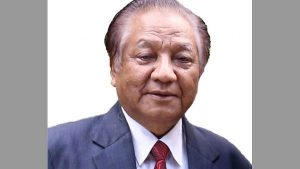 Former Mizoram Assembly speaker, Upa Rokamlova passed away. He became the speaker of the Mizoram Assembly in 1990. He joined politics in the early 1980s after he left the teaching profession and was instrumental to the signing of the historic Mizo Peace Accord in 1986.

Rokamlova won the state assembly elections three times between 1984 and 1993. He also severed as rural development and transport minister in Lal Thanhawla”s government. He left politics in 1994.