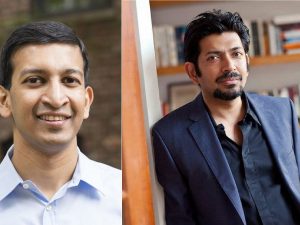 Siddhartha Mukherjee has been honoured for using “his communication skills to educate the public and build awareness about COVID-19 through forums and his widely read essays.” He won the Pulitzer Prize for his book ‘The Emperor of All Maladies: A Biography of Cancer’ in 2011. He received the Padma Shri in 2014. Among other honours, this book was listed in the Time magazine’s “All-Time 100 Nonfiction Books”.

Raj Chetty makes the list for launching “a real-time data tracker to measure the economic impact of the pandemic and assisted decision-makers as they implemented new public policies.” He received the Padma Shri in 2015, the John Bates Clark Medal of the American Economic Association in 2013 & Young Labor Economist Award in 2010. He was listed as one of the top eight young economists in the world by The Economist and The New York Times in 2008.