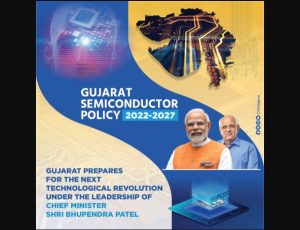 The Gujarat government has announced a dedicated ‘Gujarat Semiconductor Policy 2022-27’ with a view to generating at least 2,00,000 new employment opportunities during a period of five years. The Gujarat government has also decided to develop a “semicon city” which would be a part of the Dholera Special Investment Region. The projects approved under the Design-linked Incentive scheme of the Government of India will not be eligible for availing of the benefits under the new policy, said the state government press release.