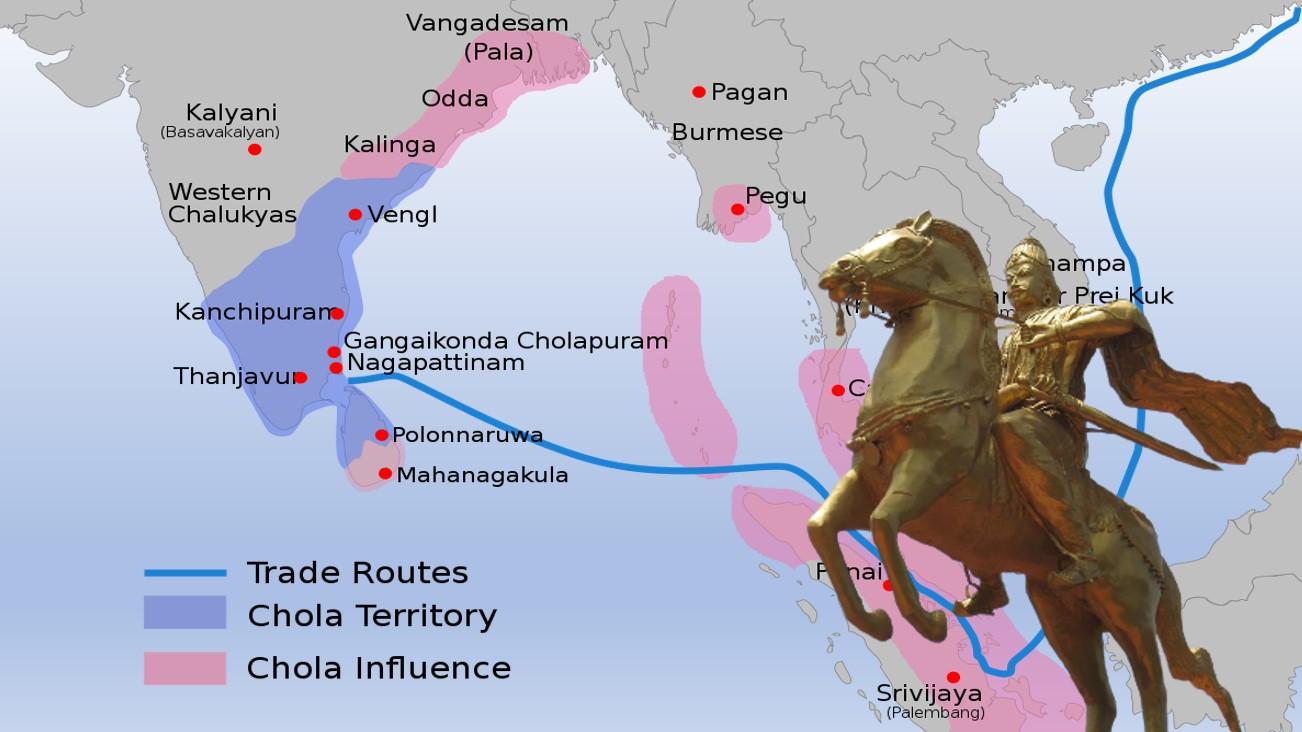 About The Great Cholas:

The Chola country (Coromandel) stretched from the Vaigai River in the south to Tondaimandalam, the capital of which was Kanci (now Kanchipuram), in the north. Much of Tamil classical literature and the greater Tamil architectural monuments belong to the Sangam period, which also saw a revival of Shaivism (worship of the god Shiva) and the development of southern Vaishnavism (worship of the god Vishnu). Revenue administration, village self-government, and irrigation were highly organized under the Cholas.

Chola kings and emperors bore the titles Parakesharivarman and Rajakesharivarman, alternately. Their chronology is difficult. Vijayalaya (reigned c. 850–870) began the occupation of the territory of the Pallavas, which was extended under Aditya I (reigned c. 870–907). Parantaka I (reigned 907– c. 953), known as the destroyer of Madurai (the capital city of the Pandyas), defeated Sinhalese invaders and united the lands of the Cholas and the Pandyas between 926 and 942. Coming to terms with the Rastrakutas, he took Nellore from them about 940, but their king, Krsna III, seized Tondaimandalam.

Rise Of Cholas: Rajaraja I:

Rajaraja I (reigned 985–1014), an able administrator, protected Vengi (the Godavari districts) and occupied the Gangavadi territory (in present-day Karnataka state), annihilating the western Gangas. By 996 he had conquered Kerala (the Chera country) and acquired northern Sri Lanka. With the booty thus acquired, he built the great Brihadishvara temple at Tanjore (now Thanjavur). By 1014 Rajaraja had acquired the Lakshadweep and Maldive islands.

His son Rajendracola Deva I (reigned 1014–44) outdid Rajaraja’s achievements. He placed a son on the throne at Madurai, completed the conquest of Sri Lanka, overran the Deccan (c. 1021), and in 1023 sent an expedition to the north that penetrated to the Ganges (Ganga) River and brought Ganges water to the new capital, Gangaikondacolapuram. He conquered portions of the Malay Peninsula and the Malay Archipelago. The Chola Empire under Rajendra even exacted tribute from Siam (Thailand) and Cambodia. Cultural and artistic influences flowed in both directions between Indochina and the Indian mainland.

Rajadhiraja (reigned 1044–54) fought the Pandyas and Cheras and defeated the Western Chalukya ruler Someshvara I in 1046, but he was killed at the Battle of Koppam, against the Chalukyas, in 1054. The Chola ruler Virarajendra (reigned 1063–69) attempted to render the Chalukya empire in the Deccan harmless, but his death enabled Vikramaditya Chalukya to dabble in Chola family quarrels.

Kulottunga I (reigned 1070–1122), who succeeded to both the Chola and Eastern Chalukya crowns by right of inheritance, wisely abandoned the Deccan and concentrated on uniting the eastern coast. Intrigues concerning the right to the Pandya throne embroiled Cholas, Pandyas, and Sri Lanka (which by then had recovered its independence) from about 1166. From 1216 the Hoysala kings obtained lands in the Chola country, former Chola feudatories threw off their allegiance, northern powers intervened, and the upheaval facilitated the Pandya conquest of the Chola country in 1257. The Chola dynasty ended in 1279.

Features of Art and Architecture of Cholas:

Legacy Of The Cholas: A great maritime power:

The Chola Empire left a rich legacy in the Tamil country. It saw majestic architectural accomplishments such as the Thanjavur Temple, amazing artwork including particularly graceful bronze sculpture, and a golden age of Tamil literature and poetry. All of these cultural properties also found their way into the Southeast Asian artistic lexicon, influencing religious art and literature from Cambodia to Java.