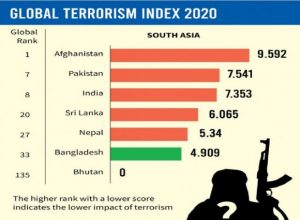 Countries Most Affected by Terrorism:

About the Global Terrorism Index:

The Global Terrorism Index is published annually by the Institute for Economics and Peace (IEP), headquartered in Sydney, Australia, to measure the impact of terrorism on the countries.