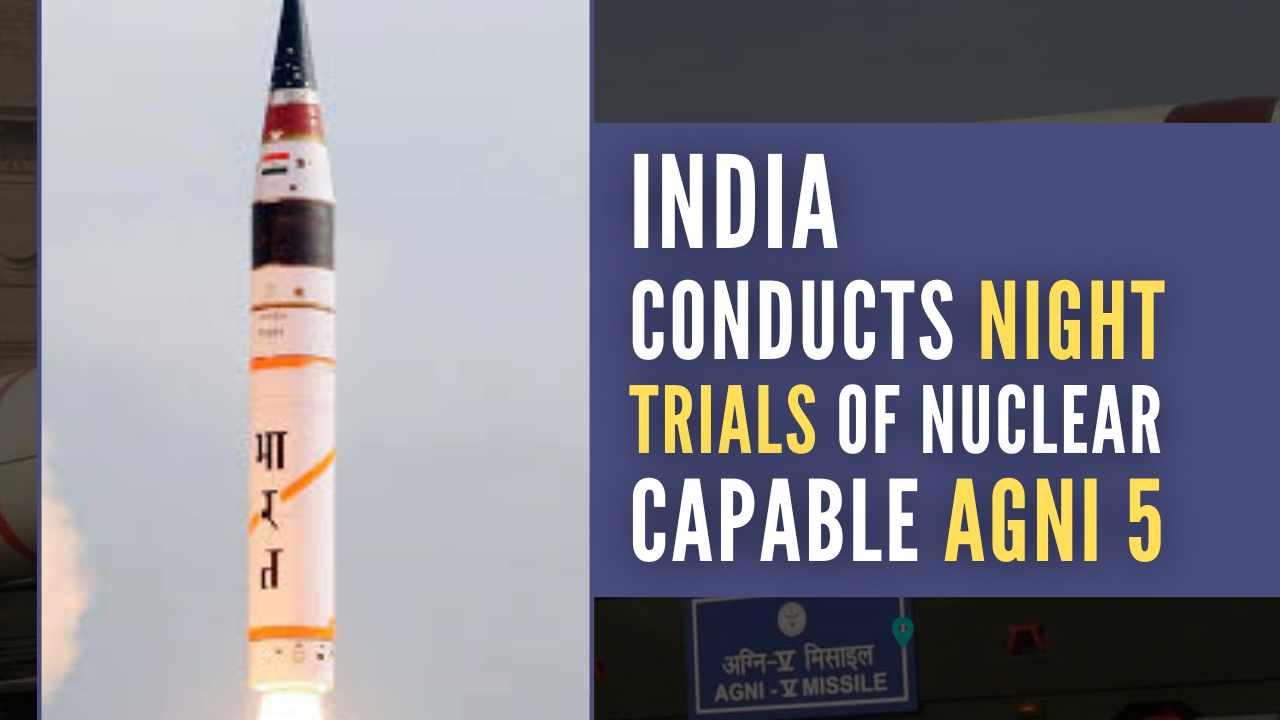 India has successfully conducted night trials of nuclear-capable ballistic missile Agni V, capable of striking targets at ranges more than 5,000 kilometers with very high degree of accuracy. The missile test firing was conducted from APJ Abdul Kalam Island off the Odisha coast. This was the latest test in the Agni missile series. According to defence sources, the test was carried out to validate new technologies and equipment on the missile that are now lighter than before.

The nigh-trials came a few days after Chinese soldiers indulged in a brawl with Indian soldiers at the Line of Actual Control (LAC) in Arunachal Pradesh. Several soldiers from both sides are injured, but none of the armies reported any deaths.

Issue With the Chinese:

What is the Agni-5 missile:

The nuclear-capable missile, which uses a three-stage solid-fuelled engine, has been developed by India’s Defence Research and Development organisation (DRDO).

The development of Agni missiles started in early 1980 under the Integrated Guided Missile Development Programme spearheaded by scientist and former President Dr A P J Abdul Kalam, who was also a central figure in India’s missile and space programmes.

Medium to Intercontinental versions of Agni missile systems 1 to 5 have varying ranges — starting from 700 km for Agni-1 to 5000 km and above for Agni-5. In June 2021, DRDO successfully tested Agni P, a canisterised missile with a range capability between 1,000 and 2,000 km. This means that the missile can be launched from road and rail platforms, making it easier for it to be deployed and launched at a quicker pace. Agni-6 is also said to be under development, with a range starting at 8000 km.

What was the latest test for:

Agni-5 has been successfully tested multiple times since 2012. Defence Ministry sources said the latest test was carried out primarily to validate various new technologies on board the missile. The flight performance of the missile was tracked and monitored by radars, range stations and tracking systems all through the mission including by the assets deployed in the sea.

Who undertook the test: