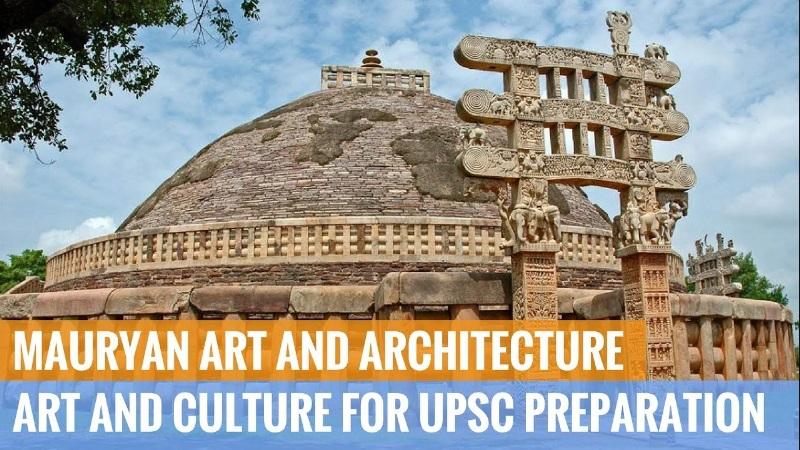 By the fourth century BCE the Mauryas established their power and by the third century BCE, a large part of India was under Mauryan control. The most powerful king of the Mauryan dynasty Ashoka who patronised the Buddhist shraman tradition. As the Mauryas established their power, we see a clear demarcation of architecture and sculpture developed under state patronage and those that were developed by individual initiative.

There palaces reflected grandeur of the empire. There palaces were inspired by Achaemenid palaces and wood was the principal building material. Megasthenes was awestruck and said these palaces are one of the greatest creation of mankind.

Example:- Sarnath pillar popularly known as the Lion Capital . It is also our national emblem. The lion figures firmly standing on a circular abacus. The abacus is carved with the figures of a horse, a bull, a lion and an elephant. Lion capital symbolises Dhammachakrapravartana (the first sermon by the Buddha), which is a great event in the life of the Buddha.

Material Used: It’s core is made up of unburnt brick while the outer surface was made by using burnt bricks, which were then covered with a thick layer of plaster and medhi and the toran were decorated with wooden sculptures.

This period saw the emergence of rock-cut cave architectures. During the Mauryan period, these caves were generally used as viharas, i.e. living quarters, by the Jain and Buddhist monks. While the early caves were used by the ajivika sect, later, they became popular as Buddhist monasteries. The caves during Mauryan period were marked by a highly polished finish of the interior walls and decorative gateways.

primarily used for the decoration of stupas, in the torana and medhi and as the form of religious expression. EX:- Yaksha and Yakshi. The earliest mention of yakshi can be found in Silppadikaram, a Tamil text.

Pottery of this period is generally referred to as Northern Black Polished Ware (NBPW).They were characterised by the black paint and highly lustrous finish and were generally used as luxury items. Kosambi and Patliputra were the centers of NBPW pottery.