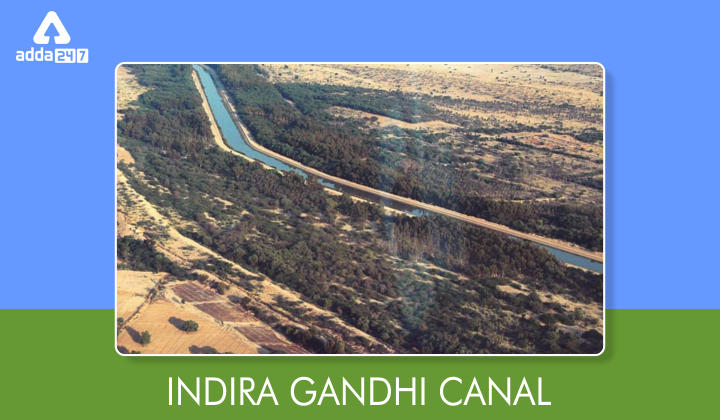 Indira Gandhi Canal is the longest canal in India, which starts from Harike Barrage near Harike and ends at the irrigation facilities in the Thar desert in northwest Rajasthan. The Indira Gandhi Canal was earlier known as the Rajasthan canal. The name of the canal was changed in the year 1984 on 2nd November, following the assassination of Prime Minister Indira Gandhi. The canal consists of Rajasthan feeder canals.

The first 167 Kilometres are from Punjab and Haryana, and the further 37 kilometers are in Rajasthan. This is followed by the main Rajasthan canal which is 445 kilometers. The entrance of the Canal runs from Punjab to Harayana and runs through the western part of the Sirsa district. The Indira Gandhi Canal goes through the Severn districts of Rajasthan: Barmer, Bikaner, Churu, Hanumangarh, Jaisalmer, Jodhpur, and Sriganganagar.

National Symbols Of India And Their Significance 2022

In the late 1940s, Hydraulic engineer Kanwar Sain brought the idea of bringing water from Himalayan rivers flow through Punjab and flow into Punjab. He estimated that the land of Bikaner and Jaisalmer can be irritated by the stored waters of the Punjab River, where the desert land was 2,000,000 ha. The Indus valley treaty was signed by India and Pakistan, which permitted India to use the water from the three rivers: Satluj, Beas, and Ravi.

The initial stage of the project was divided into two parts. Stage 1 included a 204km feeder canal from Harike Barrage, Firozpur, Punjab to Masitawali with the main canal of 189 Km from Masitawali to Pugal, in Rajasthan. This stage also included the construction of distributary canal systems of about 2.950 km in length. Stage 2 involved the construction of a 256km long canal from Pugal to Mohangarh along with a distributary canal of 3600 km.

The Indira Gandhi Canal was not an easy task and it faced several financial problems, corruption, and negligence during its construction. The plan of the Canal construction was revised in 1970 and it was decided that the entire canal would be lined with concrete tiles. However, the flow command of state 2 was increased by 100,000 ha after five more life schemes were added. Stage 1 was completed in 1983 which was 20 years behind its completion schedule.