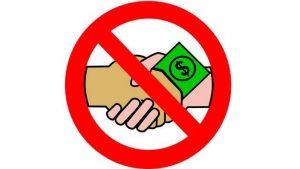 The world celebrate International Anti-Corruption Day on December 9. The main motive behind marking this day is to spread awareness about a corruption-free society. Everyone knows that corruption affects every area of society. The purpose behind a day of this kind is to make people aware of the repercussions of indulging in corruption and motivate them to follow a righteous path.

This year, the theme for International Anti-Corruption Day is “Uniting the world against corruption.” The day seeks to highlight the crucial link between anti-corruption and peace, security, and development. At its core is the notion that tackling this crime is the right and responsibility of everyone, and that only through cooperation and the involvement of each and every person and institution can we overcome the negative impact of this crime.

On this day, each and every individual and even organisations for that matter, pledge not to be a part of any kind of corruption. While combatting corruption can be hard, it isn’t impossible if everyone decides to backout and refuse to participate in corruption. Any act of bribery or misuse of public positions that lead to the fulfilment of selfish motive is wrong. By saying no to corruption, we can help create more employment opportunities, achieve gender equality and secure wider access to essential services. Above all, we can make a system fair for all.

On 31 October 2003, the General Assembly adopted the United Nations Convention against Corruption and requested that the Secretary-General designate the United Nations Office on Drugs and Crime (UNODC) as secretariat for the Convention’s Conference of States Parties (resolution 58/4). Since then, 188 parties have committed to the Convention’s anti-corruption obligations, showing near-universal recognition of the importance of good governance, accountability, and political commitment.

The Assembly also designated 9 December as International Anti-Corruption Day, to raise awareness of corruption and of the role of the Convention in combating and preventing it. The Convention entered into force in December 2005.