Skip to content
Current Affairs   »   Miscellaneous   »   Largest Countries In The World By... 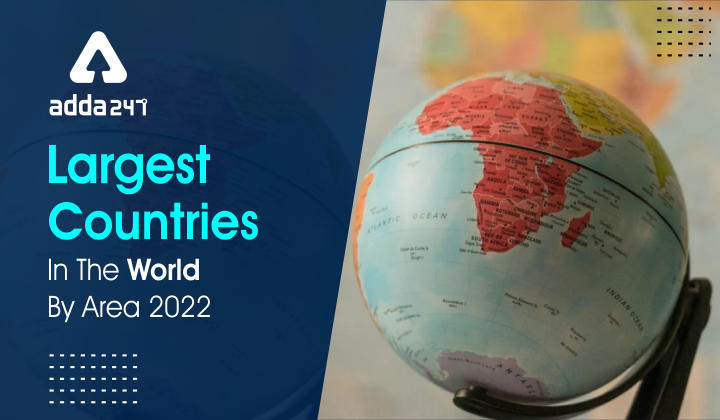 Earth, the most important place you know, has a surface area of 510,072,000 km². Compared Earth is about the size of an average sunspot. Compared to other planets, our world is about twice the size of Mars, and it is slightly larger than Venus. The total land coverage is 29.2% of Earth’s surface (149 million km²), the rest of its surface area of 70.8% is water.

What are the largest countries in the world?

Top 7 Largest Countries in the World (by total area km²):

Here is a detail of the Top 7 Largest Countries on Earth by area:

In terms of land area, Russia is the largest country in the world. It is a transcontinental country, extending halfway around the northern hemisphere and covering much of eastern and north-eastern Europe and the whole of northern Asia. Russia is so huge that it is located across 9 time zones.

Canada is the world’s second-largest country. Without its lakes, Canada would be smaller than the USA. Canada is over 8,850 km (5,500 miles) wide, from Atlantic to Pacific coasts.

The United States of America is the third-largest country by size in the world. It has some of the world’s largest lakes, deepest canyons, mightiest rivers, and most populous cities.

China is the 3rd largest country by area. It has the largest population in the world, with over 1.357 billion people as of Feb 2016. Despite its size, all of China is in the one-time zone.

Brazil is the largest country in South America. Population-wise, it’s the 5th largest in the world.

Australia is the world’s 6th largest country by area. Due to its large size and isolation from the rest of the world, Australia is sometimes known as the ‘island continent. While it’s huge, the population is only 22.6 million.

India is the seventh-largest country by total area, it is bordered by the countries of Bangladesh, Bhutan, Myanmar, China, Nepal, and Pakistan.